Andover, a safe, growing community in which to live and work which enhances the quality of its citizens' lives through recreational opportunity, quiet neighborhoods, civic involvement, fiscal and environmental stewardship.

The city we know today as Andover was first organized in 1857 under the name “Round Lake Township.” However, in 1860 the name was changed to “Grow Township” in honor of Representative Galusha A. Grow of Pennsylvania. Representative Grow spoke at a political campaign in Anoka that year, and the town name was changed to honor Representative
Grow because of his strong advocacy of the Union cause. At that time, the population was 330 and included the geographical area we know today as Ham Lake. In fact, the area of Ham Lake was considered a part of Grow Township until 1871. 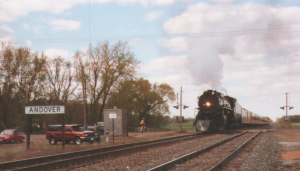 Changing the Form of Government

In 1972, the Grow Township Board of Supervisors recognized that the town was growing at a very rapid rate. They felt a village form of government would provide better services to the community. Board supervisors then voted in favor of proceeding with the incorporation process. The board voted to submit a new name for the village. “Andover Village” was chosen because the name Andover had historical interest. The historical interest, we believe, came from the Andover train station.

You may have heard the popular “train myth” about how Andover received its name. The myth states that a train tipped over in a swamp, and an eyewitness, relaying the incident, said it “went over and over,” thereby naming the city “Andover.”

Research reveals that the name Andover first appeared in an article dated March 14, 1899 in the Anoka County Union Newspaper - before train tracks were ever built in the city. The article stated that the Eastern Minnesota line of the Great Northern Railway was in the process of constructing railroad tracks from the Coon Creek Cut-off to the north. The railway announced that new railroad stations with mathematical precision were to be located 5 miles apart from each other. The new stations (from Coon Creek to the north, along the new railroad line) were to be named Andover, Cedar, Bethel, Isanti, Cambridge, Stanchfield, Braham, Grasston, Cornell, and Brook Park. On July 4, 1899, the 1st train passed through the Andover Station. Where the railway came up with the name Andover still remains unknown.

The Andover City Center Complex is located at the intersection of Crosstown Boulevard and Hanson Boulevard and is home to the city offices, Public Works Department, Water Treatment Plant, Community Center / YMCA and the Senior Center. Andover is served by a full-time Police Department through a contract with the Anoka County Sheriff’s Department. A professional paid on call volunteer Fire Department also serves the community.

Commercial activities in Andover have increased with construction of a number of new businesses throughout the city. Economic development opportunities should be directed to the Community Development Director at 763-767-5140.

On average, 50 new homes are constructed each year, with a wide variety of lot sizes, architectural styles and price ranges. The city has more than 400 acres of community and neighborhood parks. Kelsey Round Lake Park is a 136-acre nature area for hiking, skiing and environmental observation. Other recreational facilities include more than 400 acres of the Anoka County Bunker Hills Regional Park (which is home to the Bunker Beach Waterpark), Bunker Hills Golf Course, hiking / biking trails, cross-country skiing trails, camping and other outdoor activities. The Rum River Central Regional Park is located immediately north of Andover on County Road 7.

Andover’s governing body consists of a Mayor and 4 City Council members. Council meetings are held on the 1st and 3rd Tuesdays of each month. Residents may address the council at any regularly scheduled meeting. The council appoints members to several commissions that provide recommendations and information to the City Council on a variety of issues.
Utility Payments
Agendas & Minutes
Report a Problem
Building Permits
Submit a Request
Stay Informed
Employment
Government Websites by CivicPlus®
[]