When streets are covered with snow, it can be very difficult for snowplow operators to determine the edge of the road. Staking the curb with wood laths enables the operator to locate the edge of the road during the first or second snowfall. Curb stakes are intended to be used as a guide for the plow operator, not as a fence protector along property. The city is not responsible for damaged sod along the boulevard or sprinkler systems put on the boulevard or along the curb. This is the responsibility of the property owner. Stakes are available in October and can be picked up between 8:00 a.m. to 4:30 p.m., Monday through Friday at the receptionist desk at City Hall, 1685 Crosstown Blvd NW.

Placing Snow on Public Streets
Do not plow, shovel, or blow snow onto or across any public street according to the Minnesota State Statue #160.27. 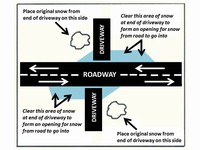 Our Snow and Ice Removal diagram (PDF) shows the area of snow to remove to allow snow from plow truck to go, and to reduce the amount that is left in your driveway. Caution should be taken when working in and around roadway for oncoming traffic.

Since there are a high number of cul-de-sacs and dead end streets in the city, it takes awhile for the specialized equipment to completely remove snow from them. The large snowplow may clear a portion of the street first, then the cul-de-sac equipment will complete the clean up. Main city streets are cleared first with large plows before the smaller equipment begins clearing cul-de-sacs.

All trails within a 2 mile radius of a school will be plowed as soon as possible during plowing operations. The trails nearest the schools is the first priority, since there has been a large increase in the numbers of walkers. The entire trail system will be plowed during regular work shifts after a snowfall.

Ordinance 218 is enforced - It shall be unlawful for any person to park, permit, or allow any vehicle to stand or remain on any city street or right-of-way or on the traveled portion of the road or to obstruct the flow of traffic, unless for an emergency between the hours of 1 and 6 a.m. from November 1st to April 15th except as provided by this ordinance. It is also unlawful to park or permit to be parked on any city street after 2 inches or more of snowfall until such time the snow has been plowed from said street.

Place garbage cans and recycle bins 2 feet behind the curb at the end of the driveway, not in the roadway.